Posted on October 5, 2017 by Meredith Carroll 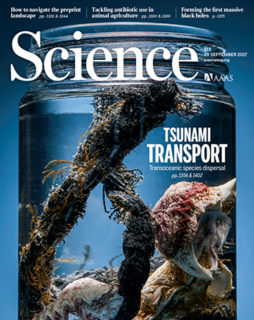 tive to Japan and representing nearly 300 species are still washing up on North America’s coasts.

These are some of the findings of a major study published September 29 in the journal Science and authored by a team led by Williams-Mystic Director Emeritus James T. Carlton.

Most of these organisms, the study revealed, clung to manmade materials. The implication: Plastic marine debris, already polluting the world’s oceans, could increase the number of non-native marine species that cross these oceans.

“This study of a remarkable ocean rafting event of unprecedented magnitude and duration reveals for the first time the profound role that plastic marine debris can now play in transporting entire communities of species in the world’s oceans—for far longer lengths of time than historic dispersal on natural substrates (such as wood) would have been possible,” Carlton says.

The study drew together a team from across the country. Williams-Mystic’s own James and Deborah Carlton joined with researchers from Oregon State University, the Smithsonian Environmental Research Center, Moss Landing Marine Laboratories, and the Oregon Institute of Marine Biology. They also relied on more than 200 volunteers to collect marine debris starting in 2012 and continuing through today. As late as this September, Jim and Debby could be found cataloguing dozens of specimens in Williams-Mystic’s Marine Science Center.

The team has won accolades not just for their study’s scope but also for its imaginative approach.

“These scientists have taken the unusual tack of looking at a natural disaster and coming to new conclusions about how our activities and structures influence species distributions in the oceans,” says David Garrison, program director in the National Science Foundation’s Division of Ocean Sciences, which co-funded the research.

In short, Carlton’s ground-breaking research suggests, natural disasters like the Japanese tsunami coincide with social and economic developments to radically alter marine ecosystems the world over. The upshot–that now more than ever, addressing marine environmental issues demands an interdisciplinary approach–should sound familiar to any Williams-Mystic student.

See also this accompanying video, articles in the New York Times and Washington Post, and features on the websites of Williams College and Mystic Seaport.